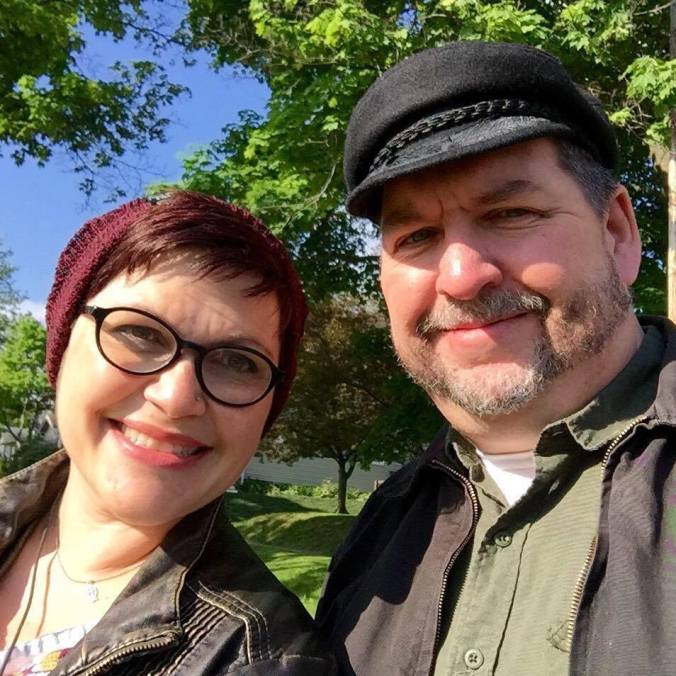 Valentine’s Day finds me feeling very grateful because I have had the same Valentine for 27 years. Back in the summer of 1988 I was working as a disc jockey for i-103. One evening a couple came to the radio station to pick up concert tickets they had won in a promotion. I was smitten with this artsy brunette named Tara Rain. At the end of my shift I told a coworker, “She is the prettiest girl I have ever seen in my life. If she were my girlfriend I’d treat her right.” In the autumn I ran into her at another concert. We chatted a bit and then she impulsively snatched the beret off my head and wore it for the rest of the show.

The radio station had been seeking volunteers to assist with the telephones during call-in contests and to take requests. We had 4 volunteers sign up and one of them turned out to be Tara. I suddenly found reasons to linger around after my shift on Friday nights. I held no illusions of an actual romance between us ever developing, but I hung around anyway because she was intoxicating to be around. Anyone who ever saw the interior of WGSI-FM can attest to its dingy and depressing atmosphere, but Tara would smile and it would light up the whole room.

One day a mutual friend called me at work and immediately blurted out, “Tara Rain likes you!” I was surprised and ecstatic, but also confused about what my next steps should be. I was afraid of saying or doing the wrong thing and afraid of putting our friendship at risk. Friday rolled around and it transpired that the other volunteers were gone that night. Perfect—Tara and I would have three hours to ourselves and I would finally be able to tell her how I felt about her. A breaker tripped and the lights in the office went out. For some reason it wouldn’t reset. So we just sat there in the darkness and talked about everything (except our feelings) between phone calls. My ex-girlfriend randomly showed up and hung around for what seemed like ages. Finally she left and we were alone again. Time was running short and I had no idea where to start. Then Tara moved in close to me and gazed at me with her kind eyes. I haltingly started to tell her how much I enjoyed spending time with her. She smiled and nodded her head emphatically to encourage me to go on. I finally managed to invite her to dinner and she said yes. We never looked back.

I have never met another person like Tara. I want to tell you a few stories to let you know what kind of person she is:

Paintings, drawings, songs, crafts, murals, pottery, photographs… Tara loves taking the items at hand and fashioning them into beautiful things. She does this with her whole life, too, grasping whatever is thrown her way and arranging it into something beautiful. I am immensely grateful for her love.

A gift of a lovely quilt.
Celebrating Beryl, Tara & Rosemary today. End of an era!
Shades of gray.
A year ago I was reading to him, now he's reading to me.
Birthday fun!
North Pole or bust.
Dog tired.
Post-thanksgiving dinner video games.
Aggie wants the humans to stop talking so she can get to sleep.
Owen met Drac & his bride, Frankenstein, and got Lost in Space on the Jupiter 2.